This piece of stone, which is so small you can hold it in the palm of your hand, was once part of a huge, magnificent structure.

During the period when it was constructed, ancient Palestine’s architects, builders and stone hewers were strongly influenced by styles of construction and ornamentation that came from the West – namely, Greece and Rome. Even today, throughout Israel and adjacent countries in the Middle East, we still see a wide range of sites decorated in the finest Hellenistic-Roman traditions and which bear light touches of local styles.

This blend of architectural styles is clearly expressed in the most ambitious building project of that era: a construction project that was so massive that it required 18,000 laborers.

After the renovations carried out by King Herod, the Temple Mount compound became one of the ancient world’s most impressive complex of structures, so impressive that it inspired the following saying attributed to the classical rabbinical authorities: “Those who have never seen the structure erected by Herod do not know what a magnificent structure is.” An endless number of quills have been broken in the analysis of ancient texts referring to the Temple Mount: the writings of the classical rabbinical authorities, the Dead Sea Scrolls, the books that were written by Josephus and by Aristeas of Corinth and which attempt to understand and reconstruct the Temple. However, all these written sources can only – in varying degrees – provide us with general descriptions.

For instance, we know that the gates and vestibules were very elaborate and were decorated with various ornamentations; however, these historical sources are unable to provide us with an accurate picture as to how these ornaments actually looked. This is where archaeology comes in.

Anyone who has visited the Temple Mount’s Southern Wall can clearly see the imprint of the Western Wall’s sealed gates, known collectively as Hulda’s Gates, the Double Gate or the Triple Gate. On the other side of the Western Wall, deep beneath the Al Aqsa Mosque, in the zone to which access is given exclusively to Muslims, one can visit the other side of these gates and see the passage leading up to the floor of the Temple compound. In ancient times, anyone looking upward would certainly have marveled at the original decorations produced during Herod’s reign. Unfortunately, today, those who manage to access that area can see only the white plaster that covers those decorations.

Fragments of many decorations have been discovered in the excavations carried out at the foot of the Southern Wall; apparently these decorations, which belong to the final years of Judean rule, fell from the top of the Temple Mount in the course of the Temple’s destruction or rolled down the hill in subsequent years.

Now, we can add this fragment, which measures 10X6.5 mm. It is made of hard reddish limestone, known as Mizzi Yahudi or Jewish stone, and it bears an ornamentation of foliage. We can clearly make out three branches and the fragments of additional foliage ornamentation. The type of stone used and the level of the ornamentation are of such high quality that it can be reasonably assumed that this stone did not come from any secondary structure on the Temple Mount, but rather was perhaps once part of the Temple itself. 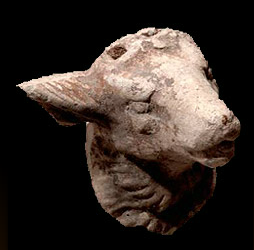 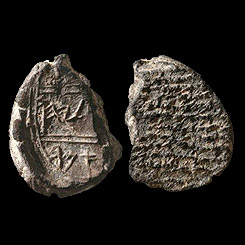 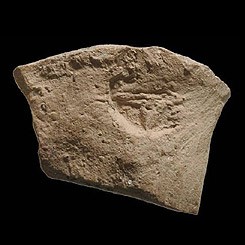 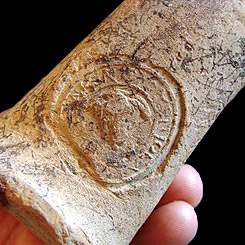