The Jewish Cemetery on the Mount of Olives

The Jewish Cemetery on the Mount of Olives

The largest and holiest cemetery in the Jewish world, containing some 70,000 graves, is the Jewish cemetery located on the slopes of the Mount of Olives. It is the final resting place of well-known figures such as Eliezer Ben-Yehuda, Rabbi Abraham Isaac Kook, Rabbi Obadiah of Bertinoro (Bartenura), Rabbi Yehuda Hehasid (Rabbi Judah the Pious) and Holy Land scholars Rabbi Yehosef Schwartz and Samuel Klein.

After the Six Day War of June 1967, interment ceremonies were held in the Jewish cemetery on the Mount of Olives for the civilians and soldiers who were residents of the Old City of Jerusalem and who were killed in the War of Independence of 1948, for S.Y. Agnon and for other public figures.

West of this highway one can find the earliest section of the cemetery, which stretches as far as the tombstones of the Kidron Valley. The newer section is located on the western and southern slopes of the Mount of Olives. The entire cemetery is divided into sections, each section belonging to a different Jewish community or sect. During the period of Jordanian rule, the Jewish cemetery on the Mount of Olives suffered extensive damage. Many of the headstones were removed and used by the Jordanian army. Since the Six Day War, major reconstruction work has been carried out on the cemetery, and the highway passing through the cemetery in the southern part of the Mount of Olives has been closed.

The Jews began to bury their dead on the Mount of Olives, which was ideally suited for this function because it was relatively close to the Jewish Quarter of the Old City of Jerusalem and because it was for the most part uninhabited. In the wake of the development of the Jewish cemetery on the Mount of Olives, various traditions in praise of the cemetery’s location sprouted and Jewish pilgrims would take dirt from the Mount of Olives in order to spread it on the graves of their loved ones buried overseas because they believed that, by doing so, they would enable the deceased to be immediately part of the Day of the Resurrection of the Dead.

The splendid view of Jerusalem from the slopes of the Mount of Olives, the mountain’s proximity to the Temple Mount and the presence of graves of important figures whose memory was sanctified by Jewish tradition no doubt all helped promote the development and sanctification of the Jewish cemetery on the Mount of Olives.

The graves in the village of Siloam (Silwan – Shiloah in Hebrew)

A unique chapter in the history of burials on the Mount of Olives concerns the early graves in the village of Siloam (Silwan – Shiloah in Hebrew). Prior to the Six Day War, the data concerning these early graves was only partial because of the hostility of the Arab residents of Siloam, who prevented scholars from accessing the site of these Jewish graves or who impeded their efforts to gain access. Only in 1968 was it possible for Israeli scholars, headed by archaeologists David Ussishkin and Gabriel Barkay, to investigate the graves thoroughly.

The Jewish graves in Siloam can be considered the nucleus and the beginnings of the ancient Jewish cemetery on the Mount of Olives. On the slopes of the Mount of Olives, especially in the cliff located in its center and which faces Jerusalem and the City of David, an ancient city of graves was carved out during the biblical period. The networks of Jewish graves in Siloam are among the most elaborate and most diverse of graves dating from this period that have ever been discovered in Jerusalem.

The basic features of the Jewish cemetery in Siloam met most of the requirements for a central Jewish cemetery in Jerusalem. The site is not too distant from the city and is located to the east of the city; it overlooks the City of David, the Temple Mount and the site of the Temple; and the relatively soft rock made it easy to dig graves there. Furthermore, because of its escarpment, it could not serve as a residential area for Jerusalem’s future expansion.

The Jewish graves in Siloam are diverse in their shape and design. Some of them are monolithic, such as the grave of Pharaoh’s daughter, while others have huge roofs and a bizarre design, the latter being an unacceptable feature in other Jewish cemeteries in Israel. Most of the graves were carved into the rock of the cliff that faces in the direction of Jerusalem. From a distance, they resemble high hatches or small windows; this feature makes it hard for scholars to access the graves.

The burial chambers cut into the rock are also small and were, in the majority of cases, intended for one or more people at the most. The graves made a strong impression on pilgrims to Jerusalem during the early eras of pilgrimages to the Holy Land, although these pilgrims did consider the headstones rather bizarre.

Among the graves in which, for the most part, the influential residents of Jerusalem and its dignitaries were buried, special mention should be made of the grave of Pharaoh’s daughter and the Rock of Ascension – the rock that, according to Christian tradition, Jesus stepped on when he ascended to heaven – which is also known as Moskobiya Bey; this grave was carved out of the rock of the cliff and was dug out on three sides. In its upper section there is a hewn chamber, to which access is extremely difficult (it is called wachman in Arabic, which means ascension). The headstone of another grave, located south of the above grave, is situated on Siloam’s main street and it reads, “Yehu, who was in charge of the Temple.”

Most of the graves in Siloam are in a sorry state of preservation. Some of them were damaged by monks who turned them into residential quarters in the fifth and sixth centuries, making rather extensive changes in the graves. However, most of the damage inflected on the Jewish graves of Siloam is the work of the Arab residents of the village, who have used, and continue to use, the graves as residential quarters, as storerooms for animals, as places for collecting garbage, and for other degrading functions. It is thus not surprising that the very important site of the Jewish cemetery in Siloam is not included in the itineraries of visitors to the Old City of Jerusalem.

Recently found out I had been adopted (57 years old) born to Jenny Helene Levy who was born in Strasbourg, France on May 23, 1921. She put me up for adoption in 1957, and I was adopted by Rabbi A. Sheingold and his wife Norma from NY. My birth mother, Jenny Levy came into the US as a Naturalized citizen on February 1958 only 3 months after the adoption was finalized. She eventually left the USA and went to live in Jerusalem in 1988. I would like to find out where my birth mother is buried. If anyone can help… קרא עוד »

Hello, I am curious as to why Jewish believers are buried with their feet facing the Temple Mount. Respectively

עוד About the Mount of Olives 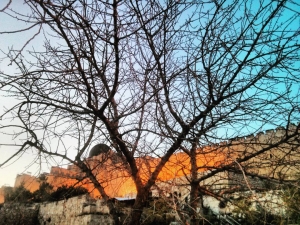 About the Mount of Olives

The Site of the Burning of the Red Heifer 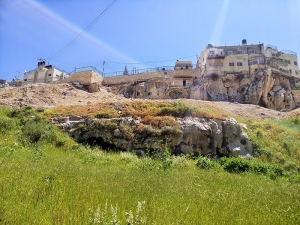 About the Mount of Olives

The Geography of the Mount of Olives